In her poem Blackbirds, the poet Julie Cadwallader Staub wrote, “…and when I turned my face upward / I saw a flock of blackbirds / rounding a curve I didn’t know was there / and the sound was simply all those wings, all those feathers against air, against gravity…”

She asked, how do they do that? And then: “If we lived only in human society / what a puny existence that would be.”

As if to reinforce the unavoidably puny, this kickoff to a new decade saw our bitterly divided government ensure we will reap the consequences of the impeachment trial for years to come, regardless of who is in power. The precedent serves both parties going forward. It was a witness-free trial, an all-white, magical-thinking State of the Union address, and an acquittal in poor conscience. No matter which side of the aisle you sit on, most people agree that in order to be legitimate, a trial requires impartiality, all relevant evidence, and due process observed. It would be hard to argue that any of those requisites were met. Whatever you may believe about partisanship in either chamber, a fair trial was the Senate’s responsibility, and they failed.

We heard the Senate Majority Leader plus a member of the Senate Judiciary Committee openly say from the get-go that they were not, and would not be, impartial, that they would guarantee “total coordination” with the defendant. We heard another Senator say that while the House Managers had proven their case, the offense was not impeachable because the defendant’s famous lawyer claimed as fact that doing “anything necessary” to get re-elected, the implication being “illegal,” was “in the public interest.” We saw a Senator ask the Chief Justice if presiding over this trial would diminish the authority of his office and of the Supreme Court, and we saw that question go unanswered. And we saw another Senator cast her swing vote against hearing witnesses, not so much on the merits of the case, but because she didn’t want to drag the Supreme Court into having to break a tie. We heard Senators refusing to hear witness testimony that they themselves could neither say was invalid nor irrelevant. And we were treated to the exquisite irony of the defendant and his team criticizing the House investigation for its failure to obtain “firsthand evidence,” the very evidence that the defendant himself had suppressed and then bragged about: “We have the materials, they don’t,” he said at Davos. Even if partisanship was a given, the refusal to hear evidence and the failure of due process were inexcusable.

In such a nation rich with ideals, awareness, and pure potential, a lot of us of us are feeling bereft. There is an ugly taunt in the air, all the way from top to bottom, and a raised sensitivity to it in ordinary, everyday people.

I marched in the Womxn’s March again, and this time a small phalanx of Trump supporters joined us. Everyone was in a good mood until the Trump supporters lined up and started shouting FOUR MORE YEARS! at us, a deliberate challenge. Their First Amendment rights were being exercised, so we exercised ours, and I personally shouted NO, NO, NO back at them. None of their signs were mean-spirited, which was a credit to them, and one sign suggesting Trump be nominated for a Nobel peace prize drew good-natured guffaws.

But it raises your blood pressure, being shouted at and then shouting back. Pretty soon a punch was thrown, by a 70-year old man from the Womxn’s March side. That was the only violence; for the most part everyone on both sides was cordial, though I sensed an extra ripple of anger that wasn’t there in previous marches. Along the parade route, some sign-holding Trump supporters, mostly men, had set up a few cameras on tripods to film us as we marched past. This is widely known to be a tactic of intimidation—LGBTQ friends who’ve marched confirmed its common use for that purpose. Seeing those cameras filming us, many Womxn’s marchers no doubt wondered: what are they going to do, identify each one of us? find out where we live? post it on Youtube so others can do that? It was upsetting. Like others, I was quietly concerned that we might see assault weapons on these men, that would add a distinct tone of menace (there weren’t.) And then the very idea that I was thinking this of my neighbors and fellow citizens whose opinions happen to differ from mine, appalled me. I had to remind myself: democracy is disputatious by nature, messy, frustrating, and interesting by design. I love my community. But I admit to being afraid of a new tone invading where people have always been able to talk things out. With taunts and a little intimidation thrown into the mix, there’s less distance between civility and disruption. Short fuses are everywhere.

I think we all knew the end result of the impeachment trial would be acquittal, but the appearance of fairness and impartiality was important. That we were denied this is likely to have repercussions no one can predict. No matter what side you’re on, the enemy of democracy is wanton unreasonableness. The Senate could have heard the evidence. They could still have voted to acquit despite it; they could have at least made the effort, but they didn’t. For me, this trial felt like holding vigil in a crumbling building next to the slain body of the Sixth Amendment.

How do we endure a period of political delirium? How do we know it will end? We don’t know, obviously. But maybe try giving yourself some time off every once in awhile, from the barrage of angst and distraction that has kept us psychically shocked and vulnerable and taught us a peculiar form of indifference, not so much denial but an exhausted form of not hearing each other unless we agree.

It helps me to turn my face upward to the sky, and listen like Cadwallader’s character did. It helps me to be reminded and humbled that despite its dominance, human society is nested within millions of other societies, one for each species, societies and forms of intelligence and perception we know almost nothing about. It helps me to let that sense of wonder carry my sore heart. So maybe, it might help to try and be one of those signs of hope, “…the thing with feathers that perches in the soul / and sings the tune without the words / and never stops at all.” Defy this heavy gravity. Continue to exercise your First Amendment rights; vote, write letters, sound off, but try to be aware of the extra tolerance and patience you need not only for your neighbors and fellow citizens in these fraught times, but also for yourself. 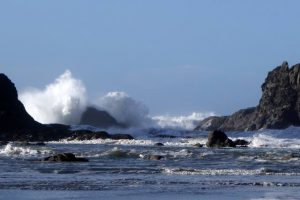 Excerpt from Blackbirds by Julie Cadwallader Staub, from Wing Over Wing, Paraclete Press, © 2019.