The Alchemy of Laughter 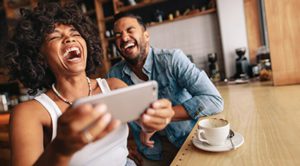 My friend Kristen, who is an otherwise upstanding Doctor of Veterinary Medicine, was visiting our home with her husband, Lou. We all knew Kristen takes fitness seriously, but over pre-dinner drinks she surprised us by saying, “Did I ever tell you about the time my mother and I participated in a Nude 5K Race?”

A brief silence descended, like the kind you get when someone cracks an egg on the top of your head and you stand there for a second trying to register what just happened. Lou, Jim and I looked down and twiddled our thumbs over our flabby little bellies as our brains processed this tidbit. Then came that slow hookup of the synapses, followed by Whoa, really? and questions:

Do the men tend to let the women run ahead and win?

Weren’t all those flying Johnsons a big distraction?

According to Kristen, racing nudists are very cool about it and quite accepting of all sorts of imperfect running bodies with their glandular aerobatics. Her mother, who was going to race in the “clothed” category, was so impressed by this attitude that she went into the bathroom to modestly take off all her clothes, and emerged nude.

The element of surprise is a key component of humor. Jokes work because they’re incongruous and defy your expectations. They translate that initial confusion into AHa! The complex neural pathways between set-up and punch line result in the release of “feel good” neurotransmitters—dopamine, serotonin, and various endorphins, which lower your defenses and are the opposite of the negative, fight-or-flight responses that release adrenaline and raise those responses. So, take a fraught subject and approach it with humor, and instead of anger and adrenaline you get endorphins and laughter. Obviously, not all fraught topics are appropriate for this treatment, and some laughter can be cruel and inappropriate, but the point is: the element of surprise is what makes something funny.

On the day Kristen told her story, our brains seemed to go into a shared state of humor overdrive, and we resembled an improv troupe tossing out lines without even thinking them through. It was one of the funniest afternoons I’ve ever spent. The pleasure of making someone else laugh is a part of all that because it’s so validating. And laughter is contagious. It’s a social signal that predates the development of speech; it’s a sign of acceptance, peaceful intention, shared relief, or other positive emotions. Laughter boosts the immune system by reducing stress hormones. It oxygenates because you’re gulping more air. It helps reduce risks of cardiovascular disease by improving blood flow and function, and it’s good for brain health, too. A Harvard professor of psychiatry said, “It’s important to make a distinction between humor and laughter… Humor is an evoked response to storytelling and shifting expectations. Laughter is a social signal among humans. It’s like a punctuation mark.”

Recalling that afternoon full of laughter still makes me smile.

So this is a reminder that you’ve already survived everything you’ve ever been through. In this divisive era we’re all living in, the social and political climate is hard enough without amplifying it by reading every negative news story or spiraling by default into constant complaint. If you’re suffering the national angst along with millions of others and even feeling physical symptoms, why not make the radical step of taking your life back? It doesn’t mean you’ve stopped being a good citizen-participant, you can still stay informed, just not so obsessively at great personal cost. What it does mean is you’ve got better coping skills.

You can actually set an intent to laugh and smile more without forcing it. Go play with your pet, have regular coffee with friends, get in touch with your inner four year-old, do something you loved as a kid and haven’t done in years, find and read books or other materials that tickle your funnybone, watch funny YouTube videos, write down hilarious conversations you hear, follow funny people on social media, give a party and ask everyone to bring their favorite joke. Limit your exposure to negative people, redundant negative news stories, and super-sad music. Get some exercise. Find the funny inside you. It’s all about restoring balance, and the alchemy of laughter can help.