Weltschmerz and Schadenfreude: Twin Horsemen of the Apocalypse 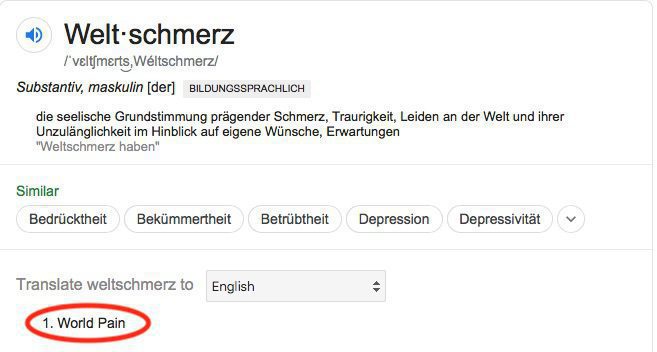 There are times when I want to flee into the wilderness to a place with no cell or internet service and stay there. This is one of them. There are also times where I try for a mood lift, maybe by drawing some cartoons skewering tone-deaf politicians. This is not one of them. But what the heck, here’s a cartoon I drew awhile back anyway. 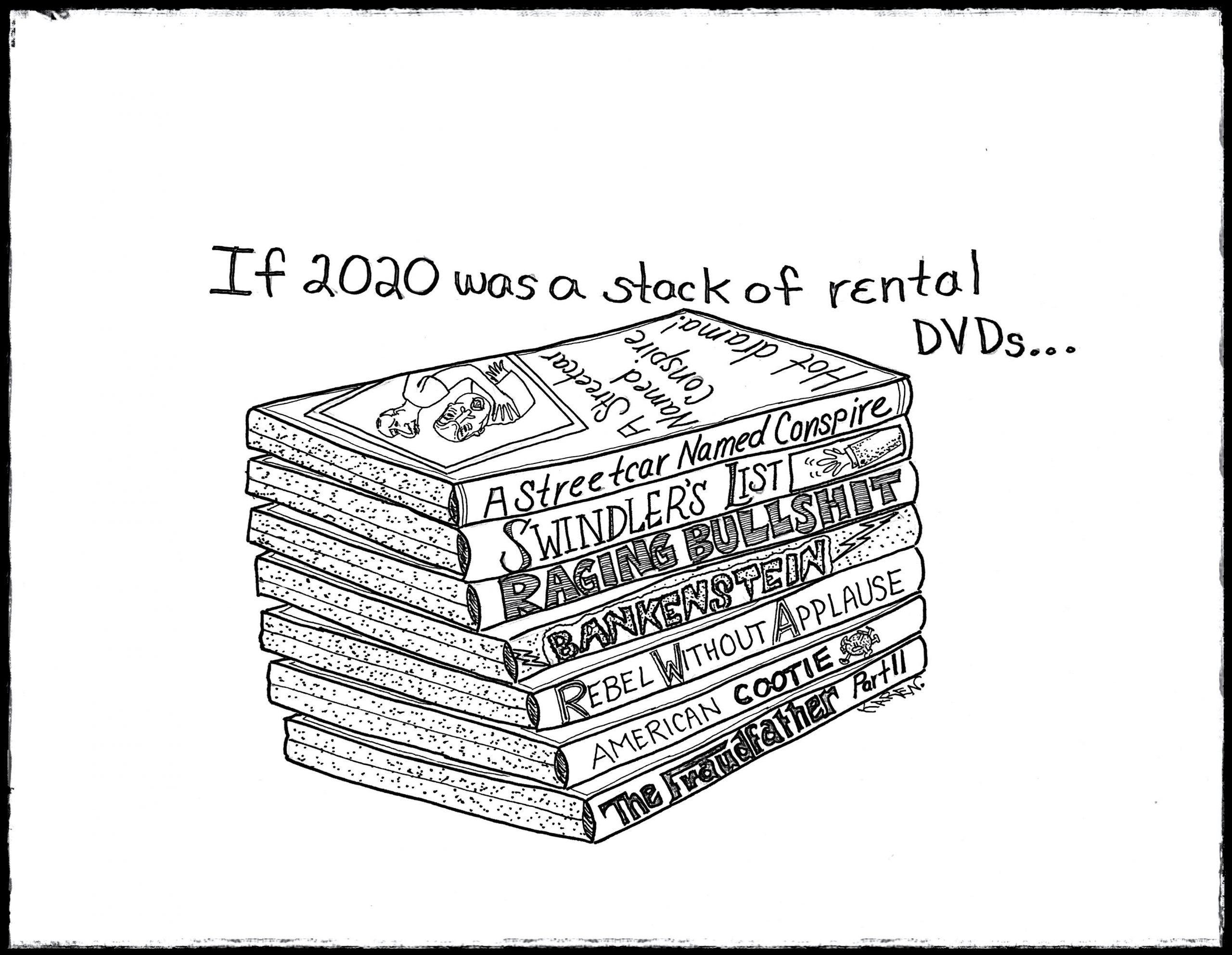 Decades ago a friend introduced me to the concept of Weltschmerz, but being a bad speller, he called it the Belch Smears. We used the phrase for whenever that malaise-y mental indigestion overtook us: “You seem a bit down, are you okay?”

Weltschmerz’s definition in German translates to, “the basic mental mood of pain, sadness, suffering from the world and its inadequacy with regard to one’s own wishes and expectations.” I prefer the simpler translation of “world pain.” 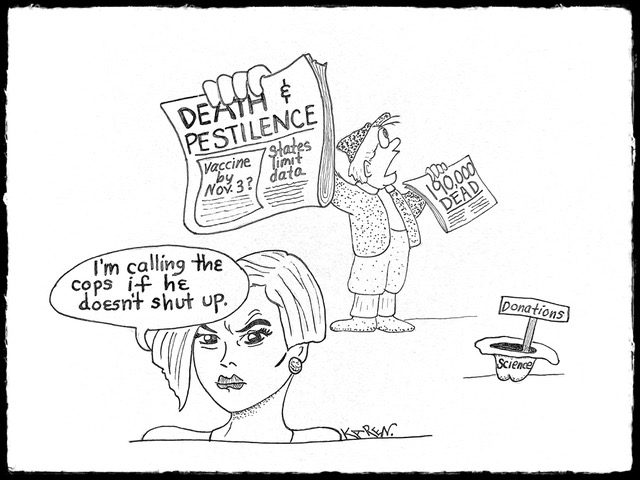 Weltschmerz is probably not a concept with which our president* is acquainted. However, evidence points to the fact that Schadenfreude is. It seems that when levels of the Belch Smears are high, so are levels of Schadenfreude.

So far, 2020 has been misery’s firehose, and we have our pick of each day’s buffet at the Desolation Diner. 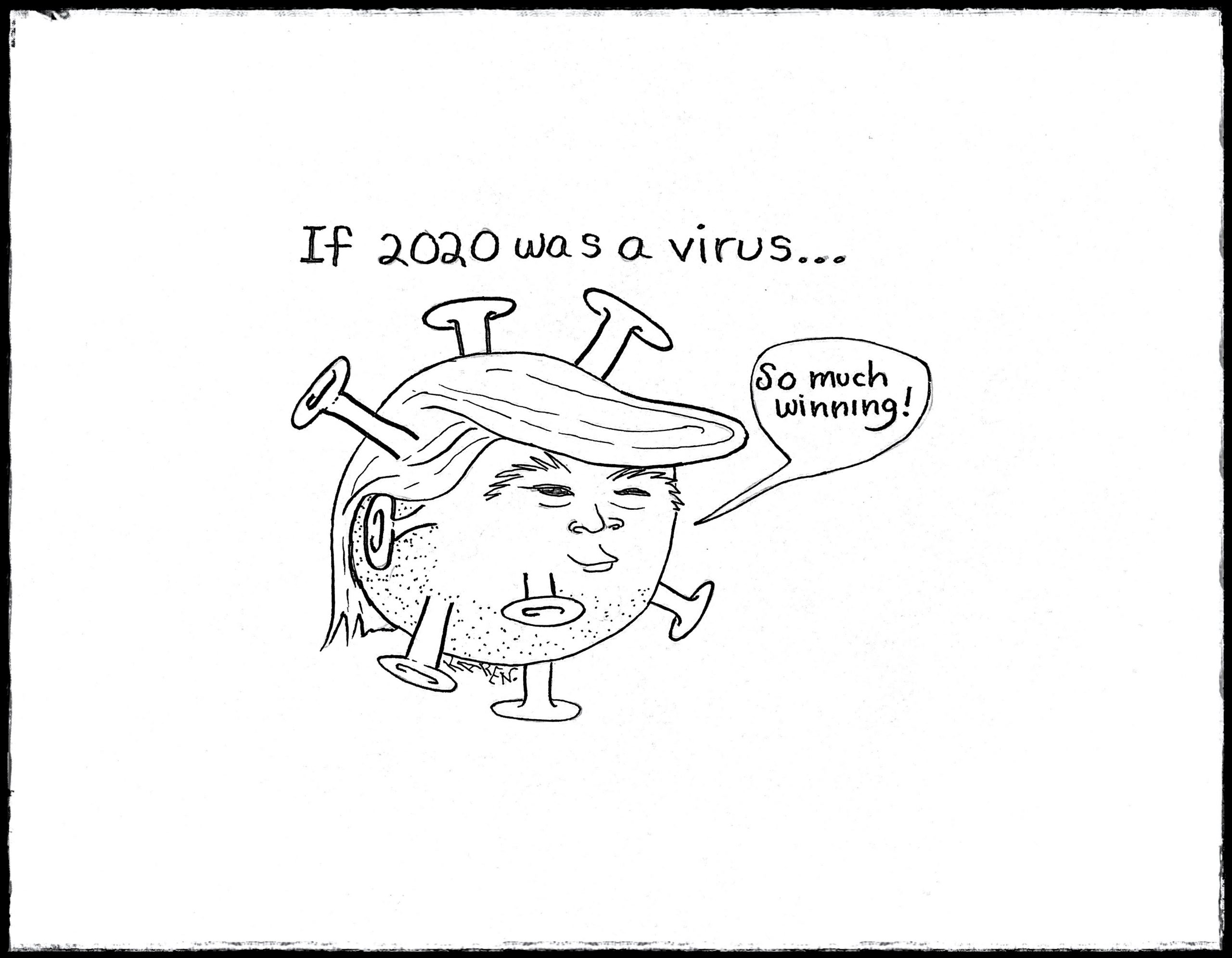 Which brings me to Schadenfreude. There are a lot of people who are in a bad space right now, with the aim to hurt or anger people they may not even know. They cannot be reasoned with. Giving way to anger gives them pleasure and increases your pain. Even in tiny Port Townsend we’ve got at least one person parading around every day with right-wing signs, yelling and playing earsplitting music through neighborhoods, and going into stores to demand that shopkeepers remove their Black Lives Matter signs.

People like that are actively trying to provoke. I don’t know what kind of pain that man is in, but it’s probably beyond nonprofessional skills to help him. While there may be a difference between a true malevolent and a person who’s been tragically misled, there’s no point in trying to have a conversation with anyone who is incapable of being open to other opinions.

From multiple crises, just about everyone on earth is experiencing the Weltschmerz. In America, far too many are also feeling (and getting plenty of media exposure for) the Schadenfreude. It’s a sickness, and recovery will take effort.

No matter what side of the political spectrum you fall on, please remember that the country won’t heal until we recognize that its illnesses include mental abuse and the fact that we’ve all been subjected to extremes of it in one form or another over the past few years. We won’t heal until there’s a stand-down on the aggression, one-sided policy, and unwillingness to listen and be reasonable. That’s not happening with the leaders we’ve got now, but it can, if we stay the course. It also comes down to choices we can make in our daily lives, like refusing to be baited into angry exchanges. We can remain calm, at least on the outside, and if the aggression persists, we can block people online, and in person, we can walk away and find healthier outlets for our feelings. It’s a choice that can counteract the Weltschmerz. And you won’t be contributing to the Schadenfreude of others.