A 7-hour, 460-mile drive on I-90 from coastal Washington got me to Wallace, Idaho and a campground next to a pub, to which of course I repaired, forsaking camp ramen. It had been an easy drive except for the kid in a beat-up pickup truck driving the wrong way on a bridge in Kellogg, Idaho, in a 75-mph speed zone. You never saw cars scatter and stop so fast. He disrupted a bunch of panicked cars on the curve of the bridge and then came right at me. I was maybe a quarter of a mile from him and could picture the pack of semi-trucks just behind me, all of us hurtling down the road at 75, but that was just an alarm flash; there was no time to be scared. It’s true, at least for me, that when something happens this fast I usually find a way to react to it without emotion. Maybe it’s because I’ve already experienced that peculiar sensation of feeling time slow down during a mortal emergency (I was once mauled by a large rabid raccoon and time went molasses-slow, but that’s another story) so it’s no surprise now when I feel time expanding. As an example, these events took a couple of seconds to unfold, but look how long it takes to read this, react, and think about it—that’s what it feels like when your brain speeds up and causes the sensation of time slowing.

I hit the brakes and flashers and braced for impact, hoping a tiny Honda might be super-noticeable to the oncoming behemoths behind me, but not so noticeable to an oncoming wrong-way pickup truck in front of me.

Long-haul truckers, bless their alert reactions. The wall of rolling steel pulled up behind and along my right, brakes squealing and horns blaring, and as I watched the kid driving toward me I inched over to nestle close alongside one of the semis, hoping the kid was just looking for enough room on the nonexistent shoulder to get by, and not looking for a head-on goodbye to his world. The kid and I made brief eye contact, his face impassive, mine as non-threatening as I could make it. How does one look non-threatening? Although this was all instinct, later I googled it. Scientific literature has demonstrated impaired facial expression recognition in certain types of schizophrenia, but nobody seems to know why. Studies also show that angry or fearful expressions are mostly perceived as threats to the observer (fear will cause him to look around you for the source of the threat you are reacting to), and smiling faces attract attention, too. And dogs famously read facial expressions of strangers to evaluate potential threat levels.

There wasn’t time to think about any of this, of course, but what ran through my mind was: don’t show any negative emotions. Don’t try to fake a positive one, either. Be neutral, be invisible. Lean slightly to your right to not be quite so square-on face-to-face with him. I couldn’t tell if that kid was mentally disturbed, high, or confused, but ruled out the latter as he deliberately drove toward the oncoming traffic. Relief flooded me as he drove past my car, and I stepped on the gas to get out of there. I suspect he got stopped by the semis further back, and it looked like no one was hurt. So you can understand why I repaired to the pub.

Next morning I left at 5:45 am, figuring to get out of town before traffic picked up. An ambulance nearly T-boned me in its haste, and as I followed it up the freeway ramp I had another sinking feeling. Just as I entered the freeway, smoke and dust and spinning semi-truck wheels and crunched metal met my gaze around a sharp bend, and I had the déjà vu again of being stopped in front of a mess of oncoming semis hurtling at 75 mph. I was one of the first to arrive on scene, and hit the flashers again, and braced. This time it was a semi that had flipped right over the Jersey barriers and was blocking all lanes in both directions. It took a bulldozer to clear the road, so everyone waited awhile and I chatted with a trucker, who said this stretch of I-90 is notorious. Later, I googled again, and found a report on crash rates as related to highway, environmental and driver factors, which tried to predict the occurrence of crashes based on those factors. Not the usual Magic Bus road trip literature, but it got me off that highway and onto the slower back roads, where the country unfolded at a more human pace.

And the rest of this road trip was, well, choose an adjective, because pleasurable and amazing don’t do it justice. More later.

(If you want to receive notifications when these posts are published, feel free to subscribe.) 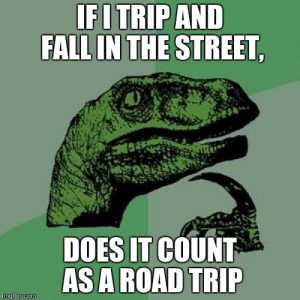