Once, deep in an Alaskan winter in the abyss of a post-divorce-induced depression, I spent an entire Saturday sitting in the living room of my rented postwar cottage, rocking absentmindedly in a creaky chair, dog in my lap, staring through small frosted windowpanes at feathers of hoarfrost growing outward on tree branches, like polar bear fur. It wasn’t my intention to sit there all day, but I couldn’t stop–I watched the hoarfrost grow in shade, then recede in low midday sun, and I rejoiced when it began to form again toward evening. A slow, crystalline world at twenty below, accompanied by the silence of an old house, a small dog, and an awe-struck middle-aged woman. I sat there long enough for the sun to track across the sky, to watch where it backlit new pattern-frosted branches in the progression of its arc. From dawn to dark I watched how the light changed, how the frost danced; it was a meditative fugue state, a transformation, a glimpse into what author Robert MacFarlane calls deep time, and an inkling of how the scale of time marked by non-humans and seemingly inanimate things is hard to imagine, despite our big brains.

Covid-19 is altering everything. In paradigm-shifting events like this, we mark our lifetimes by the before and after of it. What seemed far-fetched in early March is normal in April; deserted streets, closed shops, images of overrun hospitals as combat zones, suggest a dystopian future. What seemed so surefooted (the economy, the federal stockpile, the ability of our government to act as one body in a crisis) has stumbled. We don’t even know how long this will last, so how are we supposed to cope?

Some people see a chance for a broad reset when it’s finally over, on everything from fossil fuels and climate change, to how war is waged, to prioritizing public health and environmental policy and addressing cultural and racial inequalities. I love that altruistic optimism, and hope those things will happen. Others predict autocrats will seize more power, that there will come a massive corporate-political gaslighting campaign that will try to convince us the pandemic wasn’t so bad, saying consumers should all go back to exactly the way things were. Nobody knows what the full scope of this catastrophe will be, or what might be brought forward from it to remedy problems and improve lives, or further devastate them. This loss of once-basic certainties is fearful. But the rise of once-insurmountable possibilities is heartening.

What we do know after lifetimes of being reminded by nine-to-five jobs bookended by weekends and highly measured holidays, is that our time has never really felt like it was our own. Yet now, with too much time on our hands, it can feel disorienting. Civilized time has always felt bottled, and now it’s not. So what can you do with time? You can keep it, kill it, free it, make it, spend it, do it, span it, and try to stop it. Or you can expand it, and remember it.

I’d never before tried sitting in one place for a whole day, listening to the stillness that included my own body and mind, while watching the ways a low winter sun could work its magic with ice. Our culture’s difficulty with spending time alone with ourselves is not new. The seventeenth-century French mathematician Blaise Pascal said, “All of humanity’s problems stem from man’s inability to sit quietly in a room alone.” That subzero, hoarfrosted glimpse of a deeper way to spend time remains vivid. By evening, my depression had lifted; how could it not? I saw things I had never taken the time to see, and the memory of that day still brings me to a place of quiet peace. What about you? Can you find the unnoticed new in the everyday ordinary? Do you have a hoarfrost memory? Now is the time to summon it, or, perhaps, to make a new one. 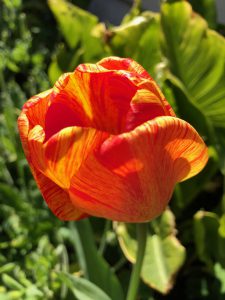